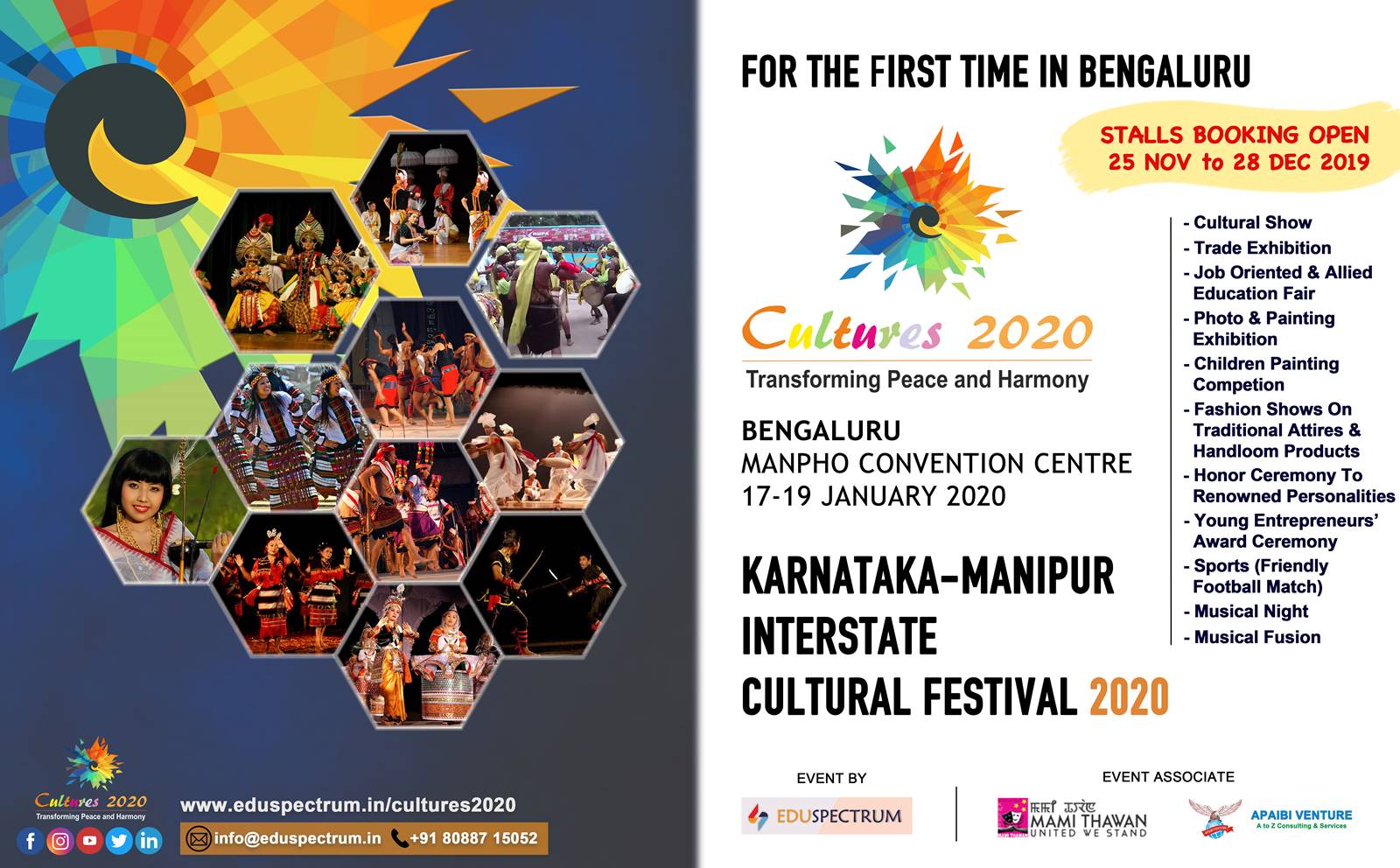 CULTURES 2020
Karnataka-Manipur Interstate Cultural Festival  17th to 19th January 2020
About The Festival “Culture” is a cultural exchange event organized to provide an opportunity to explore differences and similarities of world colorful people’s, diverse cultures, histories, heritage, traditions, customs, beliefs, societies, languages, food and much more. And we believed that such opportunities will make peoples to view the world with a different lens. Hence, it will provide an alternative perception and it broadens one’s horizons and increases the tendency of acceptance.
Slide

The main idea about our event is diversity and inclusion to be developed so that the focus would shift towards how diversity is able to enrich human learning and experience, so-called ‘Unity in Diversity’. Specially our nation's India is the most multi-diverse culture in the world and we focus to develop a platform to understand and aware of diverse cultures among the peoples and exchange every possible benefit towards one another.

Cultural exchanges allow us to experience exotic cultures across the world, but at the same time, it provides an opportunity to understand our own cultures and traditions. Hence, these opportunities act as widows of self-awareness and bringing all of us into humanity, love, peace and harmony among everyone.

Directly experiencing something is the best way to learn. Therefore, our event “cultures” a cultural exchange event that will allow anyone to experience other cultures by living and learning about languages, customs, traditions, lifestyles, food, social structures and heritage of the world. With this Idea, the Eduspectrum brought the event “CULTURES 2020” to Bangalore and continue its events across the nation, across the world.

On our first event of its kind “CULTURES 2020” presenting the “Karnataka-Manipur interstate Cultural Exchange Festival” to be held in Bangalore from 17th to 19th January 2020.

Diversity is beautiful. It is the pre-requisite of unity. Unity, instead of uniformity, creates tolerance, acceptance and flexibility. To attain unity, it is necessary to appreciate diversity. This event will help us do just that. When one experiences other cultures, view the world with another lens, accepts the “others”, one understands the very essence of diversity which is the first step towards attaining unity.

Since the last 3-4 decades, Karnataka is one of the major Educational destinations of Manipuris. Today about 50000 to 100000 peoples of Manipur resides in Karnataka, they are involved and employees under IT sectors, Educational sectors, Service Sectors, Hospitality and Medical Sectors.

There is a growing interest among people of Karnataka to know more about culture, traditions, dance, music, cinema, sports and cuisines of Manipur state and vice versa, at the same time the Manipuris also get the opportunities to understand the peoples of Karnataka that’s how it will strengthen the brotherhood and promote harmony among the peoples of both Karnataka and Manipur.

Through this event, we believe people from both the states will get to know more about each other’s through performing arts, culture, sports, cinema, music and dance. This will promote both the state’s tourism, resources, business and many more.